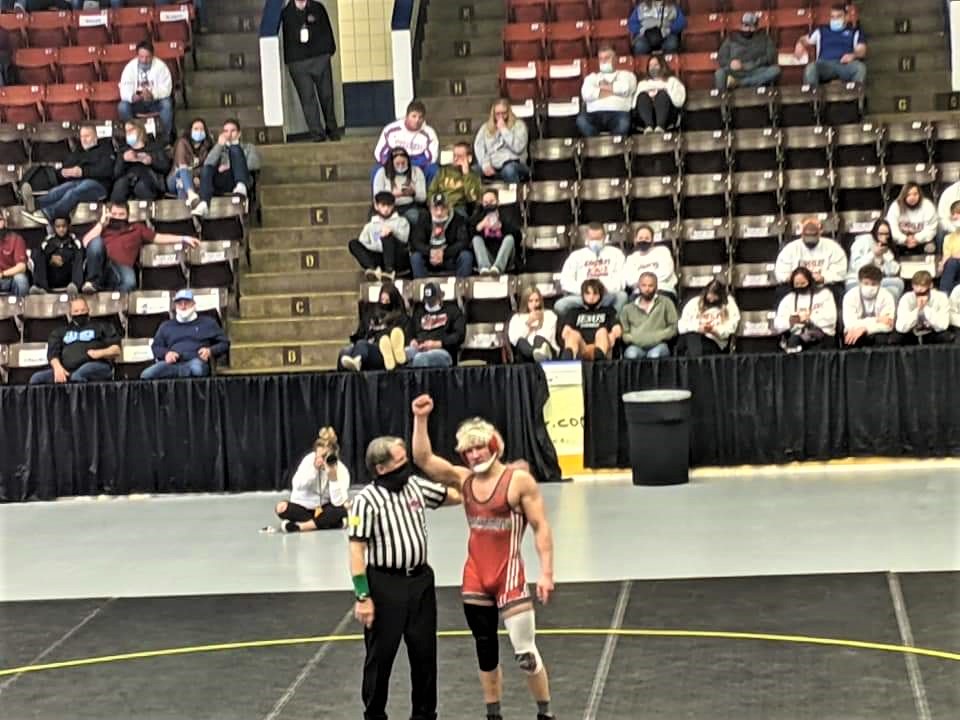 Konner Roche competed at the MHSAA Wrestling State Finals over the weekend where he wrestled his way to a 3rd place finish. Konner defeated 4 wrestlers in one day and finished his season with a 23-1 record. Konner’s only loss of the season came from a judgement call where one of his mat returns was deemed an illegal slam. The wrestler Konner was competing against could not continue due to medical concerns, and thus Konner had to forfeit the match even though he was ahead on points. The wrestler could not continue the match with Konner, but came back hours later to wrestle in the State Finals, where he lost 7-4. Konner fought back with back-to-back wins to take 3rd.

Konner’s first match of the day was against Bryson Hughes of Reed City who had a season record of 29-5. Konner pinned Bryson in 5:36 to move on to the Quarterfinals of the state tournament. Konner then faced off against Connor Young of Whitehall, a senior with a season record of 26-9. Konner captured the victory with an 8-4 decision to make the Semi-Finals against Randy Pyrzewski of Gladwin with a 28-2 record. Konner took Randy down early in the match and was leading 2-0. Randy did a standup to his feet where Konner responded by returning him to the mat. The mat return was called an illegal return and since Randy was unable to continue, he was awarded the victory. Konner wrestled back in the consolation bracket against Nic Bellaire of Dundee with an 11-6 record. Konner pinned Bellaire at the 4:17 mark to advance to the consolation finals for 3rd place against David Watson of Yale, who had a record of 16-4 entering the tournament. 2 of David’s 4 losses came from Konner at both Districts and Regionals. Konner was able to capture his third and final victory over Watson 10-4, to solidify himself with All-State honors and a 3rd in the State finish at 171 lbs.

Coach’s Thoughts:
Konner faced a great deal of adversity with having to recover from the illegal slam call that dealt him his first loss of the season. Especially since it was a call that had such widespread disagreement throughout the arena, and in a match that he was winning nonetheless. He showed an immense amount of tenacity and heart to fight back just minutes later to capture a 3rd place finish over some tough opponents. Wrestling back in the consolation bracket is never easy. You have to put your “what-ifs” aside and re-adjust your focus toward a new goal. Konner didn’t hesitate one bit with doing that and exhibited a level of maturity and mental toughness, I can only hope all of our wrestlers will find within themselves to help carry them through life.