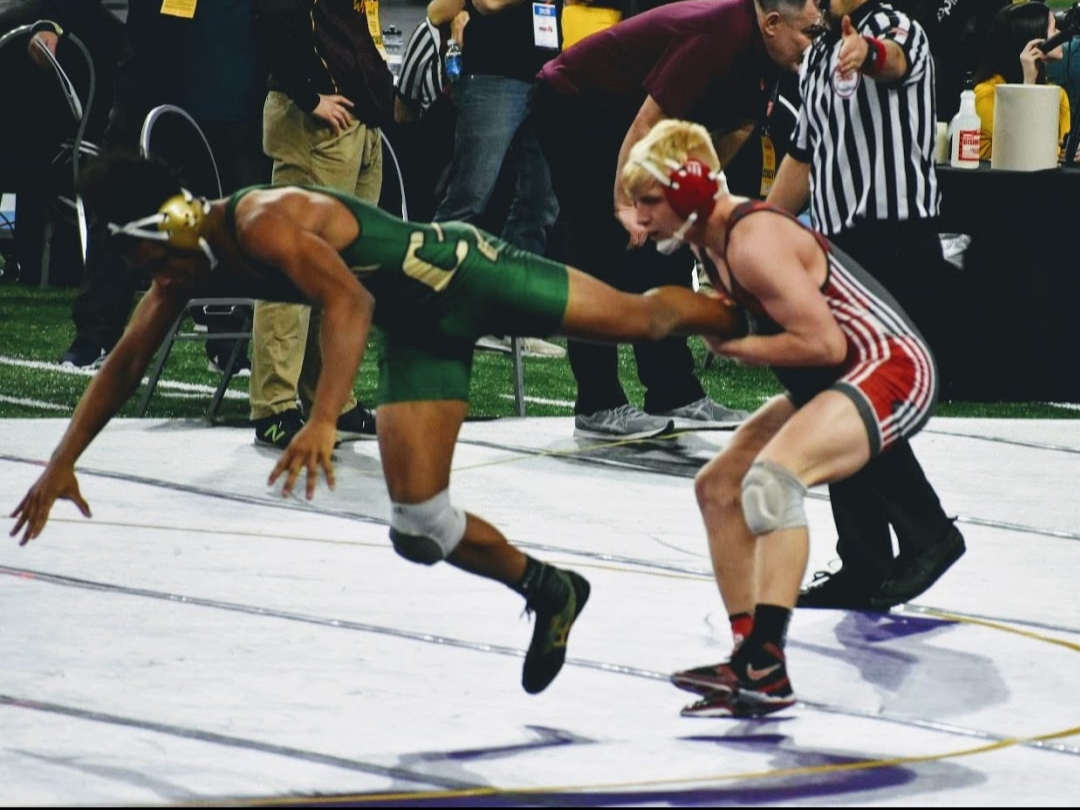 Friday and Saturday, two Frankenmuth Eagles wrestled in the biggest tournament of their careers, the MHSAA State Tournament. This was the first time either of them was able to compete at this level, and it was a very special experience they will carry with them the rest of their lives.

Konner Roche, a junior, wrestled at 145lbs. His first match was against the #2 ranked wrestler in the state, Josh Hettrick of Dearborn Hts. Annapolis. He ended up losing a well wrestled match 18-3. His next opponent was Kyan Fessenden of Kingsley. Konner was ahead early on, but the match ended up slipping away, resulting in a 7-5 loss.

Konner had a tough tournament, but is excited to come back next year to win a state championship.

Chris Mills, the only senior for the Eagles, wrestled at 160lbs. He wrestled Tsion Hawkins of Comstock Park in his first match of the tournament. He secured the victory early with a pin in 3:12. Chris then went on to wrestle Randy Pyrzewski of Gladwin. He suffered a difficult 14-5 loss after being hit with a couple big point moves. Later that day, Chris defeated Tristan Miller of Ogema Heights 7-5 to guarantee a top 8 in the state finish.

Chris returned the next day against a high ranked wrestler he knocked off earlier in the year. He managed to pin Justin VanBlaricum of Alma in 4:22 this time. Chris went on to wrestle William Vernier from Livonia Clarenceville who he had won by decision against at his Regional. It was a tight match, but Chris was able to pull off a 3-2 victory. Winning this match, qualified Chris for the 3rd/4th place matchup against David Watson of Yale. Chris wrestled a fantastic final match of his career and secured a 3rd place finish at the State Tournament with a 6-3 victory. He ended the year with a season record of 52-5 record and is now the highest state placer in Frankenmuth Wrestling history.

“We couldn’t be prouder of how these two did this year. It seemed like every other week, they were facing a new pain, ache, or bruise, but they persevered through every bit of it. For Chris to do what he did was really special. He came down here with the intention to win it all against a nationally ranked opponent in the finals. When he lost an early match in the tournament to the eventual runner-up, it was unexpected, and he had to realign his focus quickly. People don’t always understand how difficult of a task that is, but he came back strong and went on to successfully win every single match after that loss. He ended his final match with a win and against a tough opponent and proved himself as the best thus far in Frankenmuth’s history. Last year he tore his meniscus and had to miss the whole season of training and competition. Taking everything he’s faced into consideration, that makes this accomplishment just that much more special.”

Chris Mills finished his wrestling career as a Team Captain with 130 wins and only 27 losses. He is the first Eagle to ever win his Conference, District, and Regional in the same year. He placed 3rd in the State Tournament at Ford Field where he wrestled at 160lbs. Before this year, 4th was the highest State Tournament finish for the Frankenmuth Eagles.