The Eagle Varsity Volleyball Team participated in the 15-Team Birch Run Varsity Volleyball Tournament on Saturday, September 7th. They finished 3rd in their pool with a record of 1-1-1. The Eagles started pool play off by defeating Hale 25-11, 25-10 then lost to a tough Valley Lutheran team 13-25, 24-26. They split their final pool match 25-22, 19-25 against New Lothrop. Both the Eagles and New Lothrop finished pool play with a 3-3 record. New Lothrop earned the 2nd place slot (gold bracket) due to head-to-head point differential.

The Eagles were the top seeded team in the silver bracket play and they played inspired and determined winning 25-12, 25-17 against Laingsburg. In the final match of the day, the Eagles continued their focused, fighting efforts defeating the Cass City Red Hawks 25-21, 25-16! “It was a tremendous team effort today! Our passing and defense, especially in bracket play, was the best it has been so far this young season. The players are focused on continuing to get better and better in those two very critical aspects of volleyball.” – Coach Conrad 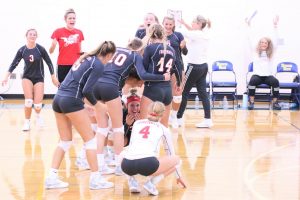 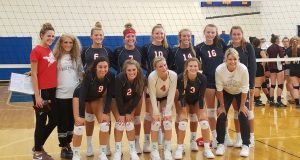