The 2018 Frankenmuth Boys Varsity Tennis team finished second in the Tri-Valley Conference, just two points shy of being crowned Conference Champs! The team awoke on Friday morning ready to leave it all on the court. It was a full day of tennis where the team overachieved at every turn, receiving tremendous efforts from each of the players. The boys were on a winning streak through the regular and post season matches and tournaments. As the coach, I couldn’t be prouder of these boys. This was not a Dream Team- it was a “Team That Dreamed!” Everyone supported each other’ whether they won or lost individually. Although the boys competed individually as singles or doubles, they worked hard as a team and communicated with each other incredibly well on and off the court.

The Eagles eased past their first round by getting ahead early and putting the pressure on. They won all four singles’ matches in straight sets, as did the doubles’ teams. It was quite clear that the team made sure to secure momentum early on!

The singles lineup most of the time was comprised by outstanding athletes: Ryan Beasecker, Arjun Manyam, Blake Carnahan, and Cade Knoll. Each had tremendous matches! Singles is a game of fitness, skill and head games.

#4 Singles, Cade Knoll stole the show by taking home the 1st Place honors. Cade started off with a shaky first match; however, after zoning in on his mental game and dedication to push himself, he came out aggressive and unstoppable in the championship!

Carter and his twin brother Conner Van Hine remained undefeated all season with a record of 13-0 at #1 doubles. They swept the conference and were able to grab the 1st Place medal!

After a 2 plus hour championship match that went into a tie breaker, #2 Doubles, Ryan Dukovich and William Braun upset Essexville Garber and took the 1st Place crown.

#4 Doubles, Cullen Peterson & Andrew Loest played their hearts out and had some incredible serves and unbelievable points in the second round. Unfortunately, they dropped to Garber in a third set tie breaker. The best part was the handshake and smiles at the end. A pure feeling of being proud was showcased by the boys.

The team will be prepping this week for the Regional Tournament this Friday, October 12th. 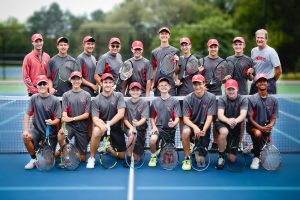