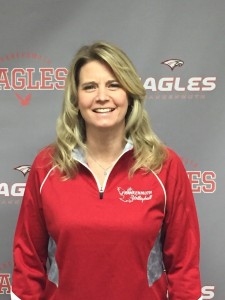 Shelly (Ginter) Conrad, relocated to the Frankenmuth area in 2014 with her family after having lived in Texas for 30 years. Originally from Elkton, Michigan, Shelly was a first team all-state volleyball player and 2-time Class C state volleyball semi-finalist at Laker High School, Pigeon, MI. After graduating from high school, Shelly accepted a full athletic scholarship to play NCAA Division I volleyball at Baylor University in Waco, Texas. Shelly was the team’s setter, captain, and most valuable player. She graduated from Baylor in 1990 with a Bachelors degree in Education–majoring in physical education and minoring in special education. Shelly has been coaching and training volleyball players for 25 years and has been involved in many aspects of the sport, to include coaching at the varsity, junior varsity, and middle school levels; founding, directing, and coaching a successful USA Volleyball (USAV) Junior Club in the Dallas area; serving as an elected representative on regional and national USAV junior boards; teaching private lessons; and directing summer camps, clinics, and volleyball academy programs. Shelly has been married to Christopher for more than 23 years. They have an adult son living and working in Frisco, Texas and a daughter who is currently a freshman at Frankenmuth High School.