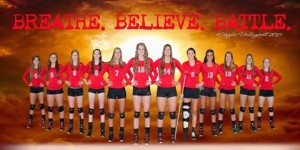 The Varsity Eagle Volleyball team started their season with a strong showing at the North Branch Invitational on Tuesday, August 25th. The lady Eagles starts the day against Capac High School 25-9, 25-10. Brayene Benner, Keri Frahm, Jackie Weess and Rebekah Gere all contributed to the first victory each with 3 kills. Raquel Roy led the team with 6 serving aces, and Lindsey Mertz put up 15 assists for the team.

The Eagles continued the dayâs journey with a victory over St. Charles (25-16, 26-24). Jackie Weess and Keri Frahm both established 6 kills, Raquel Roy had 2 aces, Lindsey Mertz had 24 assists, Jackie Weess had 9 digs followed by Hannah Karwat with 7 digs. Front row defense was led by Keri Frahm with 4 blocks and Brayene Benner with 3 blocks on the match.

Wrapping up pool play for the day, the Eagles played and defeated the Midland Chemics. The Eagles knew Midland had a strong outside hitter who would have to be shut down right away if they were to come out on top in the match and the Frankenmuth girls were able to do just that over the course of a three-set victory (25-15, 20-25, 15-10). Jackie Weess, Keri Frahm, Lindsey Mertz and Brayene Benner all contributed 5 kills in the match. Lindsey Mertz was also able to put up 26 assists for her team as well as 7 digs. Hannah Karwat covered the defensive floor and was able to pick up 15 digs during the game. Keri Frahm found 4 blocks, Mikayla Philp and Lindsey Mertz both had 3 blocks and Jackie Weess blocked 2 hits from the lady Chemics.

Coming out of their pool undefeated the lady Eagles faced their second class A team of the day, the Bay City Western Warriors. The Eagles came out victorious with 25-12 and 25-16 victories over the Warriors. Leading the offense for the eagles in this set was Jackie Weess with 5 kills, Keri Frahm with 4 kills, and Brayene Benner and Madison Wiskur both with 3 kills. Jackie Weess and Raquel Roy both established 3 serving aces while Hannah Karwat and Lindsey Mertz put up 9 digs and 4 digs respectively. Lindsey Mertz also contributed 21 assists to the victory.

The Frankenmuth squad immediately played their third class A team of the day, Canton High School. The Eagles lost in the semi-finals with scores of 16-25 and 24-26. During the match, the girls knew if they wanted a chance to play in the championship game they would have to dig deep and find a second wind. While the girls were able to play a better second set, the Eagles fell short of being able to take over Canton. Keri Frahm and Madison Wiskur led the offense with 5 kills each followed closely by Jackie Weess with 4 kills. Lindsey Mertz put up 21 assists and Hannah Karwat dug up 8 digs followed closely by Raquel Roy with 6 digs.